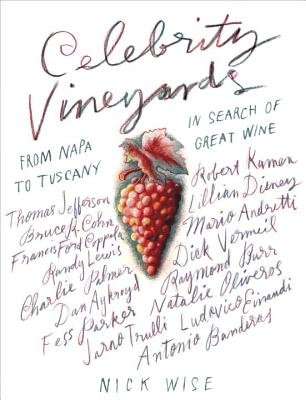 Authors Nick Wise and editor Linda Sunshine travel the US and Europe to profile and photograph world-famous vineyards, their famous owners, and their famous wines.

From the hills of Napa to the mountain slopes of Tuscany, author Nick Wise went in search of great wine and famous people who are also winemakers. His astonishing trip, the wines he tasted and the incredible people he met are recounted in loving and often humorous detail in this fully illustrated and eminently readable new book.
After spending more than twenty years in the wine trade, specializing in the champagnes of France, Wise decided he wanted to meet people who had fulfilled one of his lifelong fantasies: to own a vineyard and produce wines. In the past few years, helming a winery has becoming more and more popular among the rich and famous. People from the worlds of music, sports and entertainment were slapping their names on wine bottles and declaring themselves vintners. But how much involvement in the actual process of winemaking did these people actually have? What was it like to get into winemaking after having a successful career in another field? Were these people merely endorsements or were they part of the incredibly difficult process of creating great wine from a field of grapes?
To find out, Nick Wise journeyed to Central and Northern California to interview such winemakers as B.R. Cohn, manager of the Doobie Brothers, screenwriter Robert Kamen of The Karate Kid fame, race car drivers Mario Andretti and Randy Lewis, filmmaker Francis Ford Coppola, the legendary football coach Dick Vermeil, acclaimed chef Charlie Palmer, the Walt Disney family, and the estates of former TV actors Raymond Burr and Fess Parker. In the Niagara Wine Valley, he visited the wine estates of actor Dan Aykroyd and hockey great Wayne Gretsky. And in the hills of Tuscany, he tasted the wines of racecar driver Jarno Trulli, adult film star Natalie Oliveros (known professionally as Savanna Samson), and world-renowned composer Ludovico Einaudi. Wise's last visit was to the hills of Spain where he toured Anta Banderas, the winery of Antonio Banderas. Finally, he includes a chapter on America's very first vintner, Thomas Jefferson, whose Monticello estate is still producing wine from the grapes that the Third President of America planted more than 200 years ago.
The story of Nick's journey through wine country is filled with adventure, new discoveries, amazing people and, most important, brilliant wines (and some that are not so brilliant.) Written for fans of wine, travel, and the rich and famous, Celebrity Vineyards is a fascinating journey into a world that, for most of us, is only a dream. But what an amazing dream it is!
Some of these winemakers started making wine by accident, having bought land where grapes were already growing. After selling their grapes to other wineries, they decided to make a few bottles for themselves and the business grew from there. Others, like Robert Kamen, started from scratch with a plot of rocky land that required jackhammering to plant the vines. Some were born into historic winemaking families; others learned the craft from their grandparents who were hobbyist vintners. Some, like Charlie Palmer, make wine from harvest to labels because it is an activity to share with the whole family. These stories will delight and fascinate anyone interested in people of passion who live out their dreams. Here are artists and entrepreneurs, dreamers and business people who all share a love of wine, a respect for the grape and a joy of creating something amazing out of the land. Like a great glass of wine, these are people who will touch your heart and stay in your memory. Whether you are a wine connoisseur or can barely taste the different between red and rose, Celebrity Vineyards will delight, charm and educate your palate.
Celebrities/Vineyards included:

NICK WISE was born in New York City but lives in London, England. He became fascinated with wine at a young age and, after graduating with a BFA from Tufts University, he returned to the UK and the wine world where he was awarded the High Certificate in wine studies. He has worked in the Fine Wine departments of various leading English wine merchants, selling mostly to private clients. In 2004 he founded casevalue.com, a successful corporate champagne company that was sold last year. Wise has written six books on popular music--his other passion--including biographies of Kurt Cobain and Courtney Love. He now travels to wine regions, consults and writes full-time about his first love--wine.

"This book exhibits an easy-going style of writing that gets down to the core of why these select individuals are involved with wine. His sense of story is sure to appeal to wine enthusiasts as well as those interested in the wines simply due to the fame of their financiers. Wise organized this book in a way that would make it perfectly suitable for those who want to read one section at a time or just place it on the coffee table for guests to peruse. All in all, I found the stories both appealing and well written. Wise brings these iconic figures down to earth with their relate-able passion for one of the world’s most amazing and diverse beverages." – The Wine Economist, May 7, 2013