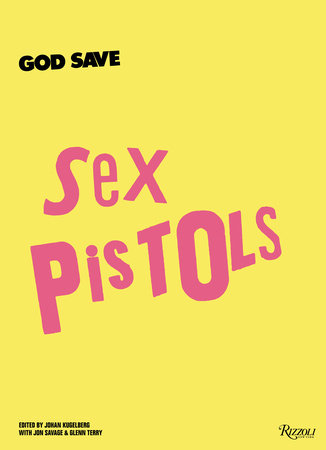 A definitive celebration packed with previously unseen material of the original punk band—the group that defined a movement, energized a generation, and brought punk music and the safety-pin aesthetic to the mainstream. The Sex Pistols have defined the look, sound, and feel of the punk movement since they formed in London in 1975. Together for less than three years—a short run that included just four singles and one studio album before they broke up in 1978—their impact on the musical and cultural landscape of the last forty years is nothing short of remarkable. The Sex Pistols—Johnny Rotten, Steve Jones, Paul Cook, and Glen Matlock (later to be replaced by Sid Vicious)—were brought together by the cultural impresario Malcolm McLaren. Between the cultivated attitude of the players themselves, the aggressive management of McLaren, and the tremendous success of their era-defining album Never Mind the Bollocks Here’s the Sex Pistols, the band embodied the punk spirit and colored the worlds of music, fashion, youth culture, and design forever. Published to coincide with the fortieth anniversary of the band’s formation, Johan Kugelberg and Jon Savage draw on an unprecedented wealth of material—from McLaren’s handwritten letters to never-before-seen photographs of the band, Jamie Reid’s iconic album artwork, and a range of ephemera from concert tickets to fanzines—to produce the most comprehensive visual history of the band ever produced and a bible of popular culture for years to come.

Johan Kugelberg is a writer, editor, and curator, and the author of numerous publications, including The Velvet Underground: A New York Art and Punk: An Aesthetic.

Jon Savage is the author of England’s Dreaming: Sex Pistols and Punk Rock and Teenage: The Creation of Youth Culture.

"If you are a Sex Pistols fan, one can imagine that you would have a very merry Christmas indeed finding this under the tree. For the rest of us, 'never mind the bollocks. . . .'"
—New York Journal of Books

"Usually my reactions to photo books about music, which in recent years have become a sub-genre for coffee table book publishers, range from lukewarm to indifferent. I liked the SEX PISTOLS monograph better because there is so much mythology surrounding the band and its aesthetic, so the extensive photographic evidence gathered in one volume is a plus."
—StyleZeitgeist Magazine

"Released to coincide with the fortieth anniversary of “Anarchy in the U.K.,” the book is the ultimate compendium of Sex Pistols history and memorabilia. Featuring a detailed chronology and oral history of the group, the book features never-before-published materials including handwritten letters, photographs, album artwork, promotional materials, and fanzines, making it a veritable treasure trove of Pistols history."
—Crave Online

"Everything You Wanted to Know About Sex Pistols: A new book takes a comprehensive look at London's seminal punk band"
—PurpleClover.com

"Forty years after they immolated onstage in San Francisco, the Sex Pistols finally get the comprehensive visual history they deserve: photographs of the band, flyers, iconic artwork by Jamie Reid and others, handwritten letters by manager/impresario Malcolm McLaren. It’s a mesmerizing was-there-then punk bible." —Vogue