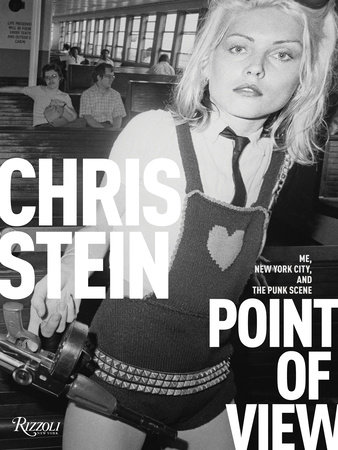 A new collection of unseen photographs of New York City's 1970s punk heyday, by one of the icons of the city's golden age of new wave, Blondie's Chris Stein.

A new collection of unseen photographs of New York City's 1970s punk heyday, by one of the icons of the city's golden age of music, Blondie's Chris Stein.

For the duration of the 1970s - from his days as a student at the School of Visual Arts through the foundation of the era-defining band Blondie and his subsequent reign as epicenter of punk's golden age - Chris Stein kept an unrivaled photographic record of the downtown New York City scene.
Following in the footsteps of the successful book Negative, this spectacular new book presents a more personal and more visceral collection of Stein's photographs of the era. The images presented here take readers from self-portraits in his run-down East-Village apartment to candid photographs of pop-cultural icons of the time and evocative shots of New York City streetscapes in all their most longed-for romance and dereliction. An eclectic cast of cultural characters - from William Burroughs to Debbie Harry, Andy Warhol to Iggy Pop - appear here exactly as they were in the day, juxtaposed with children playing hopscotch on torn-down blocks, riding the graffiti-ridden subway, or cruising the burgeoning clubs of the Bowery.
At once a chronicle of one music icon's life among his punk and New-Wave heroes and peers, and a love letter to the city that was the backdrop and inspiration for those scenes, Point of View transports us to another place and time.

Chris Stein is the co-founder, songwriter, and guitarist of the iconic punk band Blondie. His photographic work has been featured in galleries and press around the world, and published in the successful book Negative: Me, Blondie, and the Advent of Punk, published by Rizzoli. Beyond his era-defining music with Blondie, he has collaborated with a host of artists over the years, from Shepard Fairey to Glenn O'Brien and Andy Warhol.

"...[It] is a fascinating document, not only of the punk scene of the early and middle 1970s but more generally of New York City in its years of chaos, decay and creative energy." —Luc Sante, New York Times

"Although most well-known for his iconic images of Debbie Harry, which were documented in his book Negative: Me, Blondie, and the Advent of Punk, Chris Stein’ was shooting plenty of other subjects in 1970s New York City. His new book Point of View collects these often overlooked personal frames into a single place." —Popular Photography

"A far cry from the New York that Sinatra extolled, the city as depicted in the photographer and Blondie co-founder Chris Stein’s new book of images from the 1970s and 80s, Point of View: Me, New York City, and the Punk Scene, is certainly rough around the edges." —Art Newspaper

"Who better to document the gritty punk heyday of ‘70s NYC than one of its most influential luminaries? Blondie founder/guitarist Chris Stein’s new collection of vintage photographs feature iconic scenesters from William Burroughs to Debbie Harry, Andy Warhol to Iggy Pop, all set against “New York City streetscapes in all their most longed-for romance and dereliction.”
—Insdie Hook