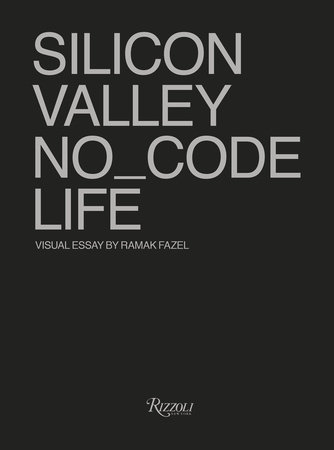 An insightful book for photography enthusiasts from Tod's No_Code.

No_Code is an intersectional project conceived by the Italian luxury group Tod's that examines changes in contemporary society. It is a hybrid idea that fuses emerging technology with Italian craftsmanship.

Tod's No_Code has commissioned the Iranian-American photographer Ramak Fazel to take a journey on the road in Silicon Valley. The aim of the trip is to represent real life in the Valley, going beyond common media narratives.

What lies behind the official images of Big Tech? How do the inhabitants of this piece of California land below San Francisco live? Where do they live? What houses do they have? What restaurants do they eat at and what cars do they drive? How do they have fun?

With his inseparable analog Rolleiflex around his neck, photographer Ramak Fazel takes us on his journey and discovers some secrets in one of the most protected enclaves. This unprecedented and surprising anthropological inquiry uses the medium of photography to reveal one of the most famous places in the world.

Tod's No_Code is a creative project born in November 2018 that interprets social changes in contemporary society, thoughts and ideas on topics which are translated into timely and suitable products of the moment.
Ramak Fazel was raised between Utah, Indiana and Tehran, then later moved to New York to study graphic design and photography. He works within, around and sometimes against the traditions of photography and installation. He lives in Brooklyn, New York.

"Tod’s driving mocs have long been a staple in the wardrobe of international power brokers, so it’s fitting that the brand is honing in on the capital of the 21st century’s next-gen tycoons. While the larger initiative may be rooted in technology, the new book emphasizes the humanity behind all that sleek innovation. Fazel’s approach was as anthropological as it was artistic, turning his Rolleiflex camera on such idiosyncrasies as the garage where Steve Jobs and Steve Wozniak developed their first computer (as well as the elderly couple who still live across the street), the senior Apple employee who plays cowboy in his downtime and the suburban watering hole favored by coders and Cupertino locals alike." —ROBB REPORT

"Entitled No_Code, Tod’s compiled a 190-page book to give a new point of view on the Valley, offering a tool that can investigate its true nature and lift the mystery that surrounds it, answering questions like: what kind of houses do its inhabitants live in? What cars do they drive? Where do tech moguls go to restaurants? Where do they meet to talk about business? How do they spend their free time?" —HYPEBEAST.COM

"Fazel has documented the glamorous—the catamaran on Oracle's manmade lake or the ritzy new Apple headquarters—as well as the less than glamorous—passport studios for foreign nationals working at tech companies, the crush of development along freeways, and motorhomes filled with workers because of soaring home prices. Plus, there are all the "birthplace" sites where major companies had their humble start. Flipping through its pages, you really do get a sense of how simultaneously normal and abnormal life on this peninsula is." —THE DAILY BEAST

"Photographer Ramak Fazel looks for lesser-known perspectives of the everyday in a new book called Silicon Valley No_Code Life, developed through the shoe company Tod’s editorial initiative No_Code and published by Rizzoli. The book, an investigation into the diverse realities of living in the San Francisco area, shows that the narrative of Silicon Valley as a high-tech vision of the future isn’t the whole picture." —FAST COMPANY