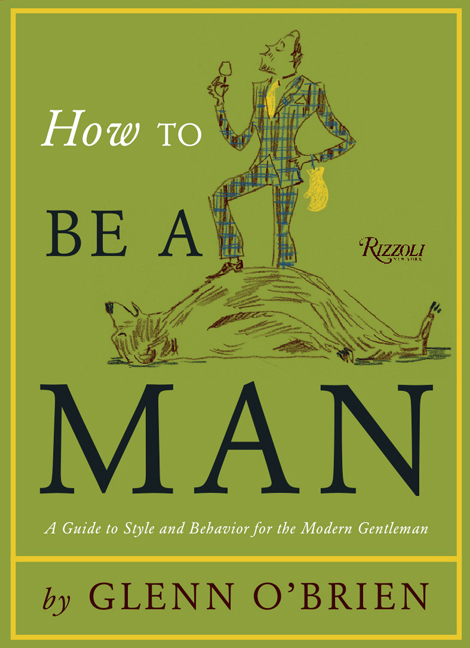 How To Be a Man: A Guide To Style and Behavior For The Modern Gentleman is the ultimate sartorial and etiquette guide, from the ultimate life and style guru Glenn O’Brien. By turns witty, sardonic, and always insightful, O’Brien’s advice column has been a must-read for several generations of men (and women). Most recently known as “The Style Guy” at GQ magazine, O’Brien dispenses well-honed knowledge on matters ranging from how to throw a cocktail party, putting together a wardrobe for a trip to Bermuda, or when it is appropriate to wear flip-flops in public (never).

Enjoy this excerpt of How To Be a Man, available April 26th in hardcover and e-book formats.

CHAPTER IV. CULTURE AND SOCIETY
How To Be Polite

Yes, Virginia, civilization did end. But in case it comes back, we don’t want to be left out, do we? In the meantime, behaving with style and aplomb will both impress those we want as friends and frighten our enemies. Exemplary behavior will make sure the welcome mat is always out when we visit and that the answering machine won’t pick up when we call. Here are a few basic considerations on behavior in an anything-goes world.

Always acknowledge the people you know. Success in society—or what passes for it—only comes to those with good communication skills. Some people have the terrible habit of gravitating only to those they perceive as their betters—I’m sure you know people who say “hi” to you when there are ten people in the room but ignore you when there are fifty. You should greet people you know even when you can’t remember their name. This is a democracy and even if they aren’t in a position to give you money, they may have a chance to get back at you. Nice up! If you can’t remember her name, just tell her how fabulous she looks and that will give you time to figure it out.

Don’t automatically introduce people. Unless sure it’s a good idea, don’t. Everyone doesn’t have to know everyone. Some people already hate one another without your knowledge or help.

Don’t hide your mistakes; they may be the best part of your resume. Since the mid-eighties, we have lived in a culture of recovery. I think it’s something we picked up from the space program. By the nineties, chic twelve-step meetings surpassed the country club and the VIP room as the place to shine. Everyone has a few skeletons in the closet. They make your profile spicier and provide real contrast: “Oh, he’s wonderful now. He used to be such a mess.” If you were awful enough you might even get a book out of it. But learn from Oprah. Slug it “fiction.”

Don’t flaunt your wealth. Obviousness is so obvious. Let others figure out just how rich you are and they’ll enjoy you so much more. If you keep reminding them of your success, they may soon tire of you. When it comes to costs—don’t ask, don’t tell. Fortunately we live in a clever age where it’s possible to find clothes that look like poor people’s clothes. No one will mug you on the street, but those in the know will recognize that those torn, abraded, and perfectly soiled jeans have a four-figure price tag. There is nothing morally wrong with a Maybach, but you will get more mileage with a Prius. All the really rich people are driving them and they position you as an idealist who can afford to be. Subtle cheapness is the sign of real wealth.

Be cool with the help. Nothing is more of a turnoff than someone who is rude to waiters, hotel housekeeping, drivers, salespeople, and the like. I once dropped a former Miss Universe contestant for being snotty to waiters. I remember after a recent economic downturn, seeing a former investment whiz selling suits in a well-known store. He should have been nicer when he was on top. That old one about being nice to people on the way up because you’ll meet them on the way down…what if it’s true? And who do you think plants all those gossip-page items about egoists behaving badly?

Spread gossip selectively. If you want to get good stuff, you have to be as discreet as a secret society. If you say you won’t tell, don’t. Test people by telling them and only them a story, possibly fictional, and swear them to secrecy. Then see if it gets back to you.

Wait until they mention it. Reserve commenting on their pregnancy, face-lift, or liposuction before they bring it up. Sometimes the light plays tricks on us. Same thing with the divorce, or the lawsuit. Sometimes our information is wrong. Never take sides in a divorce until it is final. And even then don’t.

In the event that name-dropping is required, do it right. Use the last name too and you won’t sound quite so ridiculous. Quentin, Jude, Jack, Kirsten, Gwyneth…don’t make me guess. You’re enough work already.

Don’t tell people they are dressed wrong. You might think you are helping someone who is a mess, and maybe you are, but at the risk of being hated. Think of it this way: dressed as they are now, they make you look even better. Without the tacky, the unsightly, and the fashion victimized, there would be no best-dressed list.

Always say thank you. Say it even when you’re not grateful. Even when you’re angry. You’ll get them thinking and worrying: “Was he serious? Have I gone too far this time? What’s he up to?” Kill them with cordiality. Write notes. Send e-mails. Put “thank you” down on paper. But be careful about “I love you.” Magnanimity is rare and magnificent. Thank you for reading this.

Praise for Glenn O’Brien and How To Be a Man

Glenn O’Brien is smart and funny. You can laugh and learn something at the same time. If more men read Glenn, women wouldn’t have so much explaining to do. —Kate Moss

How to Be a Man? After touring with bands for almost 100 years, I really don’t want to be one. But if anyone could convince me, it would be Glenn and this book. —Debbie Harry

How to Be a Man is a brilliant guide for the modern gentleman. Funny, informative, and written with great style and wit. My only disappointment is I wish I could claim that I had written it myself! —Tom Ford

Click here to learn more about How To Be a Man.