With the holiday season in full swing, it’s time to start thinking about what you’ll serve your guests at your Christmas, Hanukkah, and New Year’s Eve gatherings. Enjoy the recipes below or click on the News tab for recipes and tips for your entire holiday meal.

Preheat the oven to 450° F. Heat the butter with the rosemary and ginger in an ovenproof sauté pan on medium and cook for a few minutes until the butter turns nut-brown. Do not allow it to blacken or burn. Remove the rosemary and ginger and toss the apples in the butter. Season with the sugar and salt to taste. Transfer the pan to the oven and bake until the apples are very tender, about 20 minutes. Remove from the oven. Reduce the oven temperature to 400° F.

Puree the apple mixture in a blender. Transfer it to a serving bowl and set it aside.

Grate the onion. Shred the potatoes using the fine shredding disk of a food processor. Combine the onion and potatoes in a large bowl.

Season them with salt.

Form the potato mixture into six disks about 4 inches in diameter and nearly 1 inch thick, using small ring molds. Place them on a baking sheet with a nonstick liner. Alternatively, the latkes can be formed in nonstick muffin tins holding 2 to 4 ounces each.

Brush the tops of the latkes with the remaining clarified butter and bake until they are golden, about 30 minutes. Unmold them onto a serving dish. Pass the apple puree and sour cream alongside.

Cook’s Notes: The potato cakes can be made with well-scrubbed unpeeled potatoes. Clarified butter is pure fat. To clarify butter, slowly melt it and let it simmer until foam rises to the top. Remove from the heat, skim off the foam, and strain the butter though a strainer lined with cheesecloth, leaving the solids behind. For 4 tablespoons clarified butter, start with 5 1/2 tablespoons unsalted butter. Notes: To make prep easier, buy 1 pound (500 g) of peeled, seeded, and cubed winter squash. The cocoa powder whipped into the cream makes it stiffer than usual.
Make Ahead: The soup can be prepared through Step 2 and refrigerated for up to 2 days. The croutons can be stored in an airtight container for up to 2 days.

In a medium bowl, whisk the cocoa with 1 tablespoon of the cream to form a thick paste. Whisk in . cup (125 ml) of the remaining cream just until smooth. Cover the bowl and refrigerate until very cold, at least 1 hour. Whip the cocoa cream until it holds a firm peak. Cover and refrigerate.

Meanwhile, in a large saucepan, melt 2 tablespoons (30 g) of the butter. Add the onion and a pinch of salt and cook over medium heat, stirring occasionally, until softened, about 5 minutes. Add the squash, cover, and cook over medium-low heat until it begins to soften, about 10 minutes. Add the water and potato and bring to a boil. Simmer, partially covered, over medium heat, stirring occasionally, until the potato is tender, about 20 minutes. Working in batches, puree the soup in a blender until very smooth.

In a medium skillet, melt the remaining 2 tablespoons (30 g) of butter. Add the bread cubes and cook over medium-low heat, stirring occasionally, until crisp and golden, about 5 minutes. Season the croutons with salt, remove from the heat, and let cool.

Return the soup to the saucepan, stir in the remaining 3 tablespoons of cream, and gently reheat. Season with salt. Pour the soup into a tureen or pitcher. Using a pastry bag with a large star tip or a spoon, pipe or dollop the whipped cocoa cream into soup bowls. Dust with cocoa powder and sprinkle with the croutons, chives, and piment d’Espelette. Serve with the soup.

—From Bistronomy: Recipes from the Best New Paris Bistros 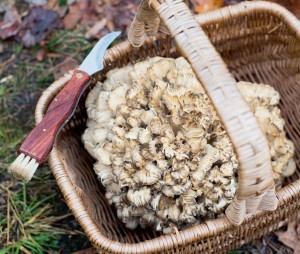 In a large, heavy-bottomed saucepan, heat the olive oil over high heat. Add the onion and cook until golden brown.

Add the sherry and continue to cook until the sherry has almost completely evaporated.

Add the cream, bring to a simmer, and cook until the liquid has reduced and thickened slightly, then season with salt and pepper.

Add the crabmeat and cook until warmed through. 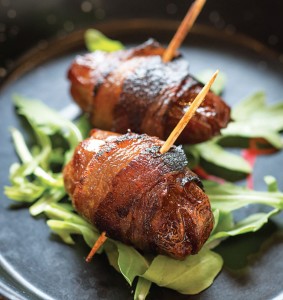 Preheat the oven to 475° F. Line a baking sheet with parchment.

Place the bacon slices on a work surface. Remove the pits from the dates. Insert an almond and a piece of the cheese in the center of each date. Close up the dates and place each at one end of a strip of bacon. Roll the date in the bacon.

Run a 6-inch bamboo skewer through the date horizontally, taking care to secure the bacon around the date. Place two more stuffed dates on each skewer.

Arrange the four skewers on the baking sheet and roast until the bacon is lightly browned, 8 to 10 minutes. Allow the dates to cool for a few minutes before serving.

Cook’s Notes: Three dates per person make for a tapa or appetizer portion. As a cocktail tidbit, use one date per skewer, to make a dozen, taking care to keep the date near the end of the skewer so it can easily be taken off as a quick bite. Other blue-veined cheeses, including Cabrales, Stilton, Roquefort, Fourme d’Ambert, and Maytag Blue can be used.